Well, this past Friday, April 13, I decided that after I got all my required items taken care of I would hit the road for a nice trip.  I mapped out where I wanted to go on Furkot and hit the road.  It turned out to be a great day, with temps that only just approached the upper 70’s (I think 78 was the high).  The short story was to ride to Rabbit Hash, KY and get some BBQ, then on to Aurora, IN for a drink at Great Crescent Brewery and on down to Madison, IN and a milkshake at Hinkle’s and then head towards home and depending on the time stop at another microbrewery.

END_OF_DOCUMENT_TOKEN_TO_BE_REPLACED

Out and About in Fall

This past weekend was a great one. Lows were in the 40s, and on Saturday it may have gotten up to 61, Sunday 75. On Saturday, I went out, rode up and down the river a bit, stopped over at Flat 12 Brewery in Jeffersonville, IN, then on to Holy Grail Alehouse, and then went back and got some food at Corner Cafe. I also stopped by the historic Louisville Water Tower on the river, and Cox’s park.

END_OF_DOCUMENT_TOKEN_TO_BE_REPLACED

This weekend was a good riding weekend.  Nearly 400 miles when all was said and done.  Saturday started out kinda slow and chilly, but quickly warmed up to some of the best riding this year.  I left the house at about 9:30 AM Saturday morning, and headed up to New Castle, KY to meet up with a friend.  While running through Crestwood, picked up another rider from a different group and we ended up riding out together.  From there, we headed east and ended up on a tiny little country road, KY607.  It was a great little curvy road, and we were lucky enough to not run into any traffic along the route.  The image to the left is just of 607, not the whole route.  If you get time, find it and ride it.

END_OF_DOCUMENT_TOKEN_TO_BE_REPLACED 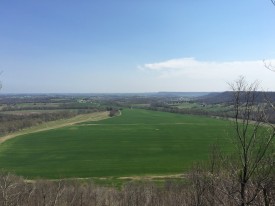 Headed out Saturday morning south of Bardstown, KY. The goal was to find an overlook I rode by last year on the Ice Breaker ride. As I was lucky enough to have gotten a photo there last year, I had the GPS info from that photo (what an awesome feature). I found it on the map, created a quick route and headed out. It overlooks a horseshoe bend in Rowan’s Creek from a road named Scott’s Ridge Road. I took my time getting there, and when I got there, some of the locals were hanging around and enjoying the day. And considering when I left home it was in the lower 50s, it was a perfect day. Chatted with one of the guys, and he was able to point out a few places in the distance and some landmarks. It was a nice conversation.

END_OF_DOCUMENT_TOKEN_TO_BE_REPLACED

It was 50 when I left, over 70 when I got home.  Not a cloud in the sky for most of the day.  Perfect weather to spend the day on the bike.  Left a little after 9 am and got home just at dark.  At first, a couple of us were going to make the ride, but after going over the route, the other rider decided he needed to stay closer to home as he had other responsibilities in the early afternoon, and the route would not let him get home in time.  That’s all good, especially for those married folks who have to keep their S.O. happy in order to ride without question.  I can forgive this one.  As you can see on the left, the route was a fairly good one for a days worth of riding.  As it was mapped, it was over 275 miles, but when all was said and done, the odometer went just over 300 miles.  As with any good ride, routes are nice, but deviations are nicer.  There isn’t much to say about the ride, so I will get into the photos.  Just below the break I will put some links for the history and information on the trestle itself.

END_OF_DOCUMENT_TOKEN_TO_BE_REPLACED

Today, with the temperatures over 60 degrees (for the end of January!) it was a must ride kinda day.  I left the house at 10 am so I could have enough daylight to go where I wanted and have time explore and still get home before it got dark.  The plan was to head slightly north into Madison, IN, meet up with a couple other riders for lunch and then head up to the JPG, a closed Army base responsible for storing and testing ordinance of all kinds.  I will include some links for more information on it further down.

END_OF_DOCUMENT_TOKEN_TO_BE_REPLACED

Warm Weather the Year Round

Well, not really, but with new heated gear, it will certainly feel that way.  I finally picked up a heated jacket liner and gloves this past weekend.  I didn’t really need the jacket liner, however it made it easy to wire in the gloves, as the sleeves already had attachments for the gloves wired in.  No running wiring through sleeves of the jacket and them getting stuck or pulling while I was riding.  Once I got everything set up and wired in, I took off on a ride to give it a good test.  The temp wasn’t even 40 deg out yet, so it was going to be plenty chilly.

END_OF_DOCUMENT_TOKEN_TO_BE_REPLACED

This entry was posted in Day Trip, Riding Gear.

Weather and Being Busy

Any who read this blog will realize the updates have been slow lately.  Mostly it is because I have been fairly busy on the weekends lately.  Or, the weather has been rainy.  I have been out a few times, however, with a nice 100+ mile trip last week to get some wine for Thanksgiving. END_OF_DOCUMENT_TOKEN_TO_BE_REPLACED

This last Sunday was an event that is held around the world, The Distinguished Gentleman’s Ride.  This is my first year participating in it, but it was a blast.  You sign up to ride, meet up dressed up “distinguished” and then ride about town hitting some locations, getting photos and riding for a good cause.  I am not going to go over all the stuff, as it is better written on the supporting websites, which I will link below.  Here, I just wanted to share some photos, with ride video coming later, once I get it processed.  The one video I am including here is more of a test of my new iPhone than it was meant for this post, but it shows the bikes at the river.  Next year, I will be more prepared and actually get officially signed up and spam FB for sponsorship.

END_OF_DOCUMENT_TOKEN_TO_BE_REPLACED

So, after failing to pull the trigger and ride down on Saturday due to storms that were supposed to come in during the afternoon but never showed, I headed south Sunday morning.  I went down to see some friends who live just outside of Bardstown on a farm.  While I was kicking myself in the arse about not going Saturday, Sunday turned out to be 100% perfect for riding.  It MAY have gotten to 65 degrees, and the sky was perfect blue and white with almost “Simpsons” like clouds.

END_OF_DOCUMENT_TOKEN_TO_BE_REPLACED

Time to get out of LouisvilleMay 2, 2020
Time to hit the road south to ride and camp down in Daniel Boone Forest.

Kentucky Kickdown 2020September 18, 2020
Head down to Louisville's largest Vintage Motorcycle Show at Turners on the river.
Join 221 other subscribers